Volcano Island was created by Simon Graham (UK) in 2006. It is a game for Piecepack and Icehouse. The "lava flows" constitute a "leave a trail" mechanism akin to mancala.

The game is set on an island whose centre houses a volcano. The volcano has been quiet for sometime now but your Shaman says it’s only a matter of time and that you should move the tribe away from its base now before it’s too late. The object of the game is to be the most dominant tribe on the Island after the volcano has had its say!

For 4 players make a grid using 25 Piece-pack tiles and place a second tile on the central one to represent the volcano. (Represented by the red block below). Remember each square shown here actually has four squares on it.

For three players remove every corner tile other than facing the player boxed in (as shown). 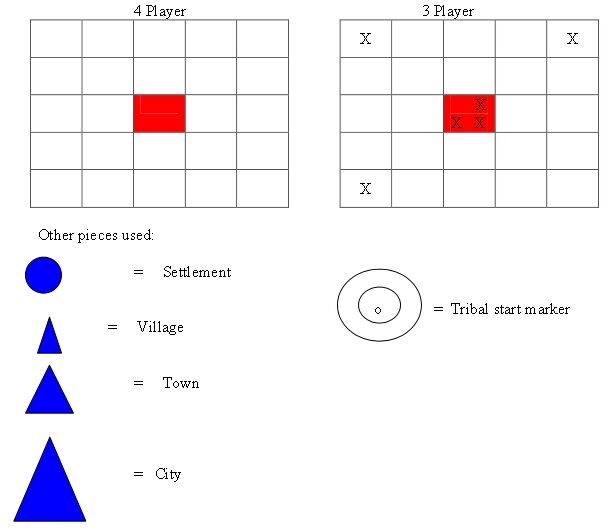 Each player takes a set of Ice House pyramids and a set of coins in their chosen colour. Place the three or four start markers, one on each of the squares on the raised volcano tile. Choose a start player and give that person the Choo-choo of power or whatever your group calls the current round start player marker.
Roll 3 Piece-pack die (blanks counting zero, Symbols as 1) to determine how many rounds will pass before the volcano erupts (If all die turn up blank then roll again). Set these dice to the side and use them to count down to that point. Each time the round reaches the start player they should reduce the numbers by 1 before handing on the Choo-choo to the left to indicate the new start player for that round.

A round is made up of one turn for each player starting with the one currently holding the start marker. A turn is made up of three actions which may be taken in any order, any number of times (to a maximum of three obviously) and circumstances allowing.

Villages, towns and cities cannot be moved. Volcanic activity allowing, their location is permanent. Any currently placed settlement may be moved as an action from any starting point to any new location so long as the rules for placing settlements above are adhered to.

A town may be placed in any space currently occupied by a village where there are three adjacent settlements one of which must be another village. (I.E. 2 Villages + 2 settlements = 1 Town). The target village is upgraded to a town and the other three are removed as the cost of this expansion.

A City may be placed in any space currently occupied by a town where there are four adjacent settlements one of which must be another town. (I.E. 2 Towns + 3 settlements = 1 City). The target town is upgraded to a city and the other four are removed as the cost of this expansion.

The influence is not cumulative and so once a city is placed it is not possible for another tribe to create a circumstance where they could deny the placement of a settlement next to it.

When the number of rounds rolled at the start of the game has elapsed the volcano erupts. Remove the tribal markers from the volcano tile. Using the heart markers from the playing card set (only because they a red) the current last player (sat to the right of he with the Choo-choo) places one lava marker on one of the four squares on the volcano tile. He then rolls two dice to determine when the second eruption will begin. After each round from now on, the start player passes the marker and counts down the new die count. Then the player to his/her right makes an orthogonal lava placement next to any existing one (excepting that after the first, all subsequent markers of that type must be placed flowing off the volcano tile). Following the second eruption the lava placement must begin on another vacant volcano tile, not as a continuation of the first eruption, the same placement rules apply. Once off the volcano tile, the new lava can flow over the previously placed lava. To distinguish the lava from that of the first eruption use the diamond markers this time (again because they a red).

The game ends immediately when either a player is unable to take any legal action or at the end of the round that includes the placement of the final lava marker of the second eruption. The winner is the player with the most points. Points are to be calculated as follows:

Having the most of each type (including settlements) also scores 3 points - In each case a tie scores for all players.
Most extended civilisation (Village, town, city farthest apart counted orthogonally) = 5 points. Whoever has the most points wins. In the case of a tie the player with the most buildings on the board wins, if still tied then it’s a tie!