UnStack was created by João Pedro Neto, Lisbon (Portugal), in 2001. The game resembles mancala games as counters are distributed ("sown") in a similar manner.

UnStack is played on a board of 7x7 squares.

One player owns 29 black stones, his opponent the same number of white stones. The author recommends stackable pieces; this, however, is not necessary as it doesn't matter where a piece is located within a particular square ("pseudo-stacks"). The initial set-up is shown below. 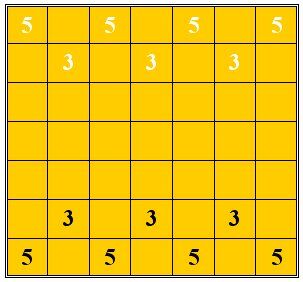 Two or more stones on the same square are called a "stack".

On his turn a player spreads one of his stacks in an orthogonal direction (not diagonal):

The game is finished:

The player who has got more stones on the board wins. If each player has a two-piece stack left the game is a draw.