The counters employed in mancala games are usually called seeds even if they are not really plant seeds, but cowries, pebbles or dung balls, while in many modern games glass stones or plastic pieces are used.

The symbolic meaning depends on the societal background of the game. In agricultural societies the counters usually stand for the seeds used to till a field. A certain amount of seeds which is captured, e.g. two or three in Oware or two, four and six in the Bohnenspiel, represents a ripe fruit that is harvested. In societies which are based on fishing the seeds can mean fish. In pastoral societies the counters are considered to be cattle. In general, the symbolic meaning is often associated with fertility.

Sometimes the counters of modern mancala games also have a special meaning. In Banan-Cala they are fruits, in Space Walk space ships, in Glass Bead Game precious gems.

No Seed is a political thriller directed by Howard and Mitzi Allen of Antigua in 2002 which tells a story of power, superstition and deception. The film is craftily woven to parallel a Warri game. Its name is an allusion to the well-known Antiguan Warri proverb:

"When you play Warri with God, you get no seed". 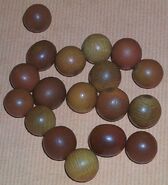 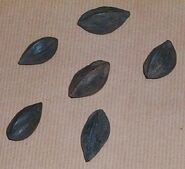 Marbles as used on Borneo 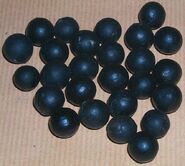 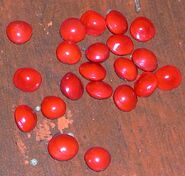 Seeds of the red bead tree from Tamil Nadu, India

Seeds of the Arnotto tree, India

Pebbles used in Africa and Asia