Ruma (from Malay rumah = "house") was created by Margarethe Martha Punga, woman of Professor Franklin Punga at Darmstadt Technical University (Germany). She described her game in the Belgian journal Sphinx for the first time in 1931. The game was also described in 1942 in a book on recreational mathematics which was written by the Belgian Maurice Kraitchik (*1882-1957), at that time assistant professor at the New School of Social Research in New York City (USA). The game was marketed in the USA as Dead Pan in 1956 by Selchow & Righter. Ruma is a predecessor of Pass It On.

"Just like eating Peanuts - when you play Dead Pan, you keep coming back for more. Another Winner following on the heels of Scrabble. Novel in appearance, new in method of play and easy - so easy to learn. Nothing to do but drop Marbles into the beautiful plastic trays - but it's a real Challenge to WIN."

The game can be played by 2-4 players. If four players participate, each controls one row. In the two-person game, a player controls two rows opposite each other. In the three-person game one player owns the two rows opposite each other while his opponents have just one row. The latter players should form a coalition against the player who controls two rows.

Towards the board center and parallel to each row, there is a furrow to store the penalty balls. The ruma in the corners are stores, in which the captures are collected. Each player owns the ruma to his right.

At the beginning, there are two, three or four red counters called balls in each pocket. Two are for beginners, four are recommended for experts. 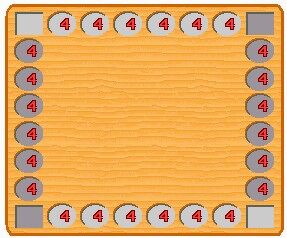 One player plays South and North, the other player East and West.

The order of moves must be South - East - North - West.

On his turn a player picks up the contents of one of his pockets and distributes the balls, one at a time, anticlockwise into the ensuing pockets and ruma, both his own ones and those of his opponent(s).

A player must move if he can, but passes if he has nothing to play with. For each pass, he receives a penalty ball that is put into the row's corresponding furrow.

A player loses if he receives 12 penalty balls. He wins when he completely empties his row, but has less than 12 penalty points. Draws cannot occur.

Two-Person Ruma ends after one of the two winning conditions is achieved. The rules are not clear about what would happen in three- or four player games, when one player loses, because he has collected 12 penalty points. Perhaps he must continue to play until a winner is found.

Ruma has a rather artificial winning condition ("12 penalty balls" - why not 11 or 13?). This could be changed in the following way:

A player passes if he cannot move, if he moved the turn before. Emptying a does not end the game nor does it mean a victory. The game ends when a player cannot move twice in a row (i.e. there aren't any moves he could do in any of his two rows). If he has two empty rows, he scores a double-victory. If he has one empty row, he scores a normal victory. If he has no empty row, he loses. There are no penalty balls in this variant.