View source
watch 01:54
Obi-Wan Finale - The Loop
Do you like this video?
Play Sound

The playing pits of mancala games are either arranged in rows (also called ranks) or form a circular pattern. The number of rows is an important criterion in some old mancala classification systems, for instance in those suggested by H. J. R. Murray and Larry Russ.

Mancala boards usually number from two to four rows, but some can have just one or as many as six.

One-row games appear to be modern inventions, except perhaps for Tchuka Ruma and what is known as Carolina Solitaire. Modern games are Atomic Wari, Sowing, 55Stones, and Progressive Mancala.

However, games such as Sat-gol, in which the holes are arranged in a circle and either player may move from any hole, can also be considered to have just one row. The board used for Eson Khorgol looks like a two-row board, but both players may play from any hole and the position of the holes in regard to the rows has no significance.

The holes of one-rank boards are always controlled by all players. The path along which seeds are sown is either circular (as in 55Stones) or just a finite line (as in Sowing and Atomic Wari).

Most traditional and modern games are played on two-row boards. The most popular of these games are Toguz Kumalak, Oware and Sungka (and closely related variants such as Dakon, Congkak and Kalah).

The number of holes per row varies in two-row games from one (Nano-Wari) to 50 (En Gehé).

Usually a player may only start a move from his own pits, but share with their opponent a circular path along which the seeds are distributed.

Three-row boards are mostly known for games from the Horn of Africa (Ethiopia, Eritrea) and some border regions in neighboring countries (Uganda, Kenya, Sudan). Isolated games were reported from the Congo and south-eastern China (Yunnan province). Examples are Selus, Komari, three-row Laomuzhukeng, and perhaps historical Lela or Lele which (according to the British anthropologist P. Townshend) could have derived from Ethiopian games together with Embeli or Imbelece.

Most three-row games have six holes per row. In these games, each player usually controls one outer row and the three rightmost holes (as viewed from him) of the central row. The seeds are distributed along a circular path shared by both players.

Mbelele has inserted holes and can be either considered a two-row or a three-row game. However, unlike in normal three-row games each player sows his seeds along his own circular path.

A modern three-rank game is Trias. In this game, each player controls one of the outer rows and both share the central row.

Games played on four-row boards are widepread in central, eastern and southern Africa including Madagascar and the Comores. Another game (Hawalis) is played in Oman, a country with old relations to Zanzibar and the East African Coast. Some four-row games were described in Yunnan, South China (four-row Laomuzhukeng, four-row Laomuzhuqi, Zigulzoqge, and Dongjintian). The Chinese games are usually extended versions to accomodate more players. There are only a few modern four-row games, e.g. Chuba, the Amboseli Game and Four-rank Diffusion. The most popular traditional mancala game played on a four-row board is Bao, which has the most difficult rules of all mancala games.

The number of holes per row varies from 4 (Katra) to 40 (Tchouba). The central rows are known as inner rows or front rows, the other two rows as outer rows or back rows.

The seeds of almost all four-row games rows are sown along two separate circles, one path for each player, which is in their own area of the board.

The games from Yunnan and the Four-rank Diffusion, a modern game, are exceptions as seeds are distributed along multiple overlapping circular paths.

At least one mancala game from Yunnan (South China) has a five-row board, Laomuzhuqi, when five people play. 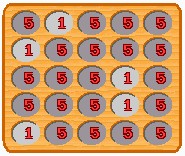 The only true six-row game known by scholars is six-row Katro in Madagascar. It is related to four-row games and like them each player sows his seeds cycling around his own board area. 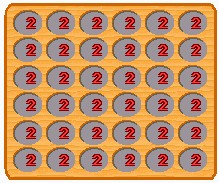 Tchela, a game played in Angola, has a rather unusual board with inserted holes, so that it could be considered to be a four-row or a six-row board.

Eagle, V. A.
On Some Newly Described Mancala Games from Yunnan Province, China, and the Definition of a Genus in the Family of Mancala Games. In: De Voogt, A. J. (Ed.). New Approaches to Board Games Research: Asian Origins and Future Perspectives (Working Papers Series 3). IIAS, Leiden (Netherlands) 1995, 48-62.
Eagle, V. A.
On a Phylogenetic Classification of Mancala Games, with Some Newly Recorded Games from the Southern Silk Road", Yunnan Province, China. In: Board Games Studies 1999 (1); 51-68.
Murray, H. J. R.
A History of Board-Games Other Than Chess. Oxford (England) 1951.
Pankhurst, R.
Gabata and Related Board Games of Ethiopia and the Horn of Africa. In: Ethiopia Observer 1971; 14 (3): 154-206.
Russ, L.
The Complete Mancala Games Book: How to Play the World's Oldest Board Games. Marlowe & Company, New York (USA) 2000.
Voogt, A. J. de
Distribution of Mancala Board Games: A Methodological Inquiry. In: Board Games Studies 1999 (2); 104-114.