In 1936, Frederick Henry Robertson ("Dada") of Constant Spring Road, Halfway Tree, Jamaica, then still a British colony, invented a mancala game, that was patented two years later (Patent Number: GB 476,480). It is an Oware variant, which he generalized to larger boards to make the game more interesting. Perhaps it is based on Woll, a mancala game mentioned by Robertson. He filed a second patent that described further improvements in 1938 (GB 493,112).

Robertson suggested a standard two-row board as used in Oware, but also a triangular and a six-sided board. In addition, there are "receptacles" to deposit the captured counters, one for each player. Robertson didn't say who has which holes. 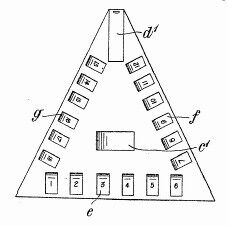 Initially there are four stones in each hole.

On his turn, a player distributes the contents of one of his holes, one by one, in the counter-clockwise direction.

If the last stone falls in an opponent's hole which afterwards numbers two or three stones, its contents including the one placed last are captured.

If this hole is preceded by an unbroken chain of holes of which each one contains the same amount of stones (either two or three), their contents are also captured. Contrary to Oware, it is not permitted to capture a mixture of two's and three's.

If the opponent has no stones left, he must be "fed" so that he has someting to play with in his next move.

The game ends when a player has no stones left at the start of his turn.

The patent doesn't state what must be done with the stones that still remain on the board. Perhaps they are awarded to the player who owns their holes or they are not counted at all.

Each player's score is the sum of the counters he collected plus the "honours" he received during play:

The player with the highest score wins. Robertson also stated: "The first player to reach a score of 100 wins a rubber."