Online games are games played over some form of computer network typically the Internet. Many mancala games can be played online.

"Online gaming is a technology rather than a genre; a mechanism for connecting players together rather than a particular pattern of gameplay."

* Ranking only visible of those players, which are online.

** Reason(s) for not being recommended are given in bold letters.

* "Perfect abstracts" are abstract strategy games for two players or teams with perfect and complete information, no chance and no manual dexterity required.

** The game site, however, has very low traffic (a total of less than 40 games per month).

A flawed implementation of Oware was offered by Jij Bent (Netherlands), which has got sister sites called Brettspielnetz (Germany) and Your Turn My Turn (USA). However, the rules were not abapa for many years, which could result in very odd endgames. Cycles were ended, when a board position repeated for the first time even if only one player had seeds in their holes. 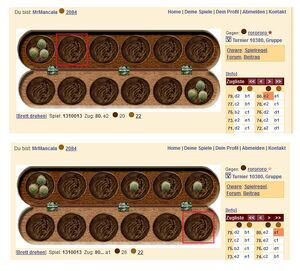 South plays 6, which results in a repetition of the board position. Note that the lower board had been reached before (in move 67) by sowing a singleton from 6 (that is, a different move). Brettspielnetz awarded all 6 seeds to North (!) who, for that reason, won the game by 26 : 22 points. However, it would have been correct to let North feed South first and, thereafter, to give each player the 3 seeds on his side. In fact, abapa play results in a win for South by 25 : 23 points.

However, the implementation is still not abapa as the following example shows:

The position repeats for the first time, but the opponent is now to move! And yet the game ends.

Retrieved from "https://mancala.fandom.com/wiki/Online_Games?oldid=20855"
Community content is available under CC-BY-SA unless otherwise noted.