Mega Hexano is a variant of Volcano played with 9 stashes on a hexagonal board. It's a lot like Mega Volcano, except that the game ends when someone captures one piece of each color and one complete single-color "tree" (a stack of a small piece on top of a medium piece on top of a large piece).

The game was designed in 2005 by Jeremiah Wittevrongel. He is a software developer and lives in Calgary, Canada. Mega Hexano is still under development.

Note: These rules assume you know how to play Volcano. They probably won't make sense if you don't already understand the rules for the base game.

Mega Hexano is a tactical game for two or players. Players take turns moving caps around a playing area filled with volcanoes. This triggers eruptions of colored streams of lava onto the playing field. The object of the game is to score the most points. The game ends when one player captures a collection of icehouse pieces which includes one of every color, and one complete tree of any single color.

Using seven of the stashes, create 35 solid-color "nests" (a stack of a large piece on top of a medium piece on top of a small piece). Create two nests of the eigth color (assumed to be white in these rules). Arrange the 37 nests in a hexagonal layout as shown. Or, arrange them randomly in the same overall shape. 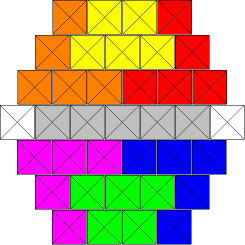 Place the five small pieces of the ninth color (assumed to be black) on top of any five nests. These five pieces are the caps. Put aside the remaining pieces, as they will not be used.

The general mechanics of play are the same as those for Volcano. Please refer to those rules for guidance on how the caps move, how eruptions occur, and when eruptions stop. All of these rules stay the same in Mega Hexano.

The major difference between this game and Volcano in terms of mechanics is the shape of the playing field, and the directions you may move the caps. Caps can be moved to any adjacent volcano or empty space. Given the hexagonal arrangement of the board, this means there are at most 6 possible moves for a given cap (as opposed to 8 in Volcano).

The game ends when a player captures one piece of each of the seven non-white colors, including at least one complete tree of one of the colors. At this time, all the scores are tallied as described below, and the highest score wins.

Though white pyramids count as 'wild' when scoring as described below, they do not count as wild for fulfilling the requirement of a complete tree of a single color.

Points are awarded primarily for trees. A piece can only be used in one tree for scoring, but players may use their pieces in the most advantageous fashion when calculating their score.

White pieces can be treated as though they are any other color. In this sense, they're wild, and can help greatly in creating single-color trees for scoring.