Manji (Japanese for: (literally) "the character for eternality" 萬字), a mancala game, was invented on December 9, 2007, by Ralf Gering. He is a Religious Studies major who lives in Hain, Germany. The game is played in 25 pits which form a swastika (from Sanskrit "svástika" = lucky / auspicious object). In Buddhism, the left-facing swastika (Japanese: "omote manji" 表卍) is representing love and mercy, while the right-facing swastika ("ura manji" 裏卍) stands for strength and intelligence (the clarity of the diamond realm). Manji can be played using either swastika. The longest axis measures seven pits, the game can be started with seven different moves (symmetry taken into account) and the players need a total of 77 stones to play the game. Seven is the number of ascent and of ascending to the highest; attaining the center. The seven steps of Buddha symbolize the ascent of the seven cosmic stages transcending time and space. The seven-storied prasada at Borobudur is a sacred mountain and axis mundi, culminating in the transcendent North, reaching the realm of Buddha. The Manji board also has a large pit in the center called the "Buddha Field" ("Buddhaksetra"), the Pure Land produced by a Buddha's merit. Manji was designed exactly seven years after the inauguration of the World Buddhist University in Bangkok. The game is devoted to the Amitabha Buddha of the Pure Land School.

Initially each pit contains three stones, except the Buddha Field which has five stones.

The game is played by two persons. Each player controls two rays opposite each other or 12 pits. The Buddha Field belongs to both players (or rather: to no player). 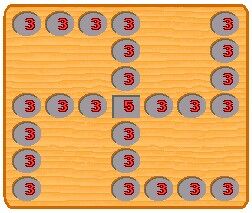 At his turn a player distributes the contents of one of his pits, one by one, into the ensuing pits always moving towards the Buddha Field in the beginning. This represents the recitation of the Nembutsu, "Namo Amitabha Buddha", which means: "I entrust in the Buddha of Immeasurable Light and Eternal Life".

He may also sow the contents of the Buddha Field in either direction along his rays. This symbolizes the emanating grace of Amitabha.

If the last stone falls into an occupied hole, its contents are distributed in another lap.

If the player reaches the outer end of one of his rays, he continues to sow in the opposite direction (as in 55Stones).

The move ends when the last stone is dropped into an empty pit.

If the last stone falls into an empty pit, the player captures the contents (if any) of the corresponding pit of the other player. The own stone isn't captured. 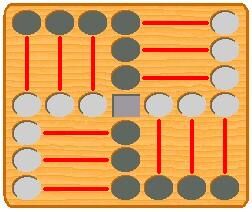 The captures are removed from the board.

Nothing can be captured from the Buddha Field.

The game ends when a player can't move.

The stones that are still left on the board are won by the player who could move last.

The player who captured more stones wins. Draws and ties are not possible.

The Buddha Field is of central strategic importance. For most of the game, it is a disadvantage to start a turn or a lap from it as this would give the other player the opportunity to capture more stones.

Towards the end, however, it is good to play the Buddha Field because most of its stones will be won by the player who moves last.

Players are to behave in a respectful manner, honoring the Divine in them.

Thus they are supposed to greet each other in an appropriate way, e.g. by performing namaste (Sanskrit: "I bow to you") or "mushin gassho", before the game starts.