Laomuzhuqi ("Old Sow Game") was played by the Han in Baoshan municipality, Hetu township, several kilometres east of Baoshan City (South China). The game was first observed by Vernon A. Eagle in April 1996. His informant was a 68-year old man who told him that he didn't play it since he was 8, when it was a popular pastime of village children and that no-one plays anymore today.

The game was played on a rectangular grid, divided into squares that were drawn in the ground.

Before it became extinct, Laomuzhuqi was played on a board, which had five holes per row. It could be played by 2-5 players, of which each one controlled one row. Depending on the number of players a board therefore had 2-5 rows.

At the start of the game one hole of each row contained one bige stone called "old sow" ("laomuzhu"), while the other holes were filled with five small stones called "piglets" ("zhuer"). 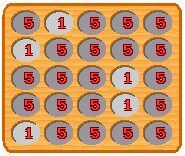 The player who started the first round was determined by a variant of Rock, Paper, Scissors called "huaquan" ("Throw Fingers"): the players simultaneously throw out either thumb, index finger, or little finger of their right hands. Index finger beats thumb, thumb beats little finger, which in turn beats index finger. In subsequent rounds the trailing player played first.

On his turn a player picked up the contents of any pit of his row and distributed clockwise or counterclockwise. The direction of sowing was determined by the first player who had to start from an inner row (if the game was played by three or more) and could chose to go in either direction, left or right. This direction was kept throughout the game, while the contents of holes in adjacent rows were sown in the opposite direction.

After the last stone was dropped, the player lifted the counters of the hole which followed in the same direction and then distributed them in another lap. This type of relay sowing is called after Indian mancala games "Pussa Kanawa" sowing.

The turn ended when the last stone fell into a hole, which was followed by an empty one.

If the hole following the empty one was occupied after the sowing had ended, its contents were captured.

Any stone (which might have been a piglet or a sow) sown into a hole with a sow, and any stones in a hole into which an old sow was sown, stayed together for the rest of the game. They were sown as one unit and were even captured as one unit.

The game ended, when a player whose turn it was had only empty holes.

The stones, which were not yet captured, belonged to no-one.

The old sow counted five points, the piglets one point each. The player with the greatest nuber of points won the game.

Eagle, V. A.
On a Phylogenetic Classification of Mancala Games, with Some Newly Recorded Games from the "Southern Silk Road", Yunnan Province, China. In: Board Games Studies 1999 (1); 51-68.