Katro is played by the Betsileo people in Fianarantsoa in the southern highlands of Madagascar. The game was described by the Dutch mancala researcher Alexander Johan de Voogt during an extensive field study in 1998. The board is usually dug in the earth and the players, mostly adult women and men, are often surrounded by a curious crowd of spectators.

Katro is played on a 6x6-board, a very unusual size for a mancala game. Each player owns one half (upper or lower) of the board.

Initially there are two stones in each hole. 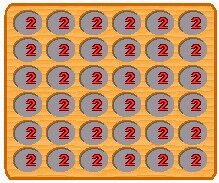 You must start your move in the outermost row of your side which has a non-empty hole. Singletons can also be moved.

Moves are multi-lap. As in four-rank Mancala you only move on your side.

If the last stone is dropped into a non-empty hole, all contents are picked up and are distributed one by one in the following holes by continuing in the same direction.

The game is played in a boustrophedon manner. The direction of play is either (see notation below) abcdefghijklmnopqrfedcbalkj or alkjihgrqponmabcdefgh.

Players are not permitted to pass a move.

The game ends when a player has no move. The player who moved last is declared winner.

From the inital position South plays B to the left... 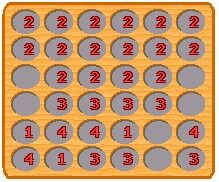 and captures r and m.

To capture all opponent's stones of his front row

The game is about breaking the balance.