Intermedium (also known as Stepping Stones) is a two-dimensional sowing game, which was invented by Matt Crispis and published by Ariel Games in 1976 in the UK.

The game can be played online at Super Duper Games (SDG) since March 10, 2007. However, the board is oriented in a wrong direction at SDG.

"[Intermedium] is simple to learn, but may lead to complicated situations that require deep analysis and forward thinking. Single pieces do no move, but they are useful a stepping stones for your captures. And they may become alive by putting another piece over them. Before you master the game, avoid early attacks against the City that may prove costly. Build up your strength gradually and evenly by dominating, if possible, the center. You should also avoid building 'formidable' stacks of six or more pieces - if taken you may lose the game at one stroke. Leave some forces behind to defend your City in case of emergency."

Intermedium is played on a rectangular board of 7 x 10 intersections (in the schematic diagram below squares). The central intersections in the first and last rank (in the diagram squares marked with a cross) are called "Cities". One player plays on the blue intersections, the other player on the red ones.

Initially each player has 44 counters. The player sitting on the lower side has blue stones, while his opponent on the upper side has red ones. The initial set-up is shown in the diagram below. 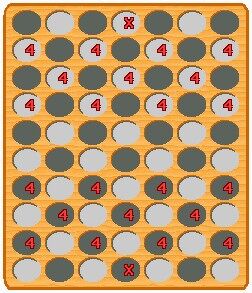 Blue starts (in SDG it is Red, which is wrong).

On his turn, a player sows the contents of one of his intersections, which contains at least two stones.

The counters are distributed in any diagonal direction or combination thereof, leaving one stone on each intersection they are passing over.

It is not permitted to return to an intersection by making a turn of 180°.

In their first turn, each player must occupy at least one intersection that had been empty.

The counters of an opponent's intersection are captured, when it is surrounded from all sides by friendly stones after the last stone in a sowing was dropped on an adjacent intersection, which contained a single stone.

The counters of up to four intersections can be captured in one move.

A player wins when he "captures" the enemy city, which is effected in the same way as stones are captured. It does not matter whether the city is occupied or not. Another way to win is to leave the opponent with no valid moves.

18 games played at Super Duper Games were analyzed. Each side won 9 (50 %) of the games. The shortest game took 9 moves to complete, the longest would have taken 68 moves, if it hadn't been resigned before. On the average a game was 28 moves long.