Hexano-Duel is a variant of Volcano played with 9 stashes on a hexagonal board. It's a bit different from Volcano, though in that it can only be played by two players, and each player has their own set of caps.

The game was designed in 2005 by Jeremiah Wittevrongel. He is a software developer and lives in Calgary, Canada. Hexano-Duel is still under development.

Hexano-Duel is a strategic game for two or players. Players take turns moving caps around a playing area filled with volcanoes. This triggers eruptions of colored streams of lava onto the playing field. The object of the game is to score the most points. The game ends when one player captures a collection of icehouse pieces which includes one of every color, and one complete "tree" (a stack of a small piece on top of a medium piece on top of a large piece) of any single color. 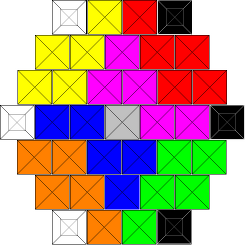 While this game derives from Volcano, the mechanics are a little different, so be careful.

Each stack of pieces represents a volcano, and the three small white and small black "caps" keep the volcanos beneath them from erupting. One player controls the white caps, and the other player controls the black caps. Play starts with the player sitting closest to due South of the playing area.

On each turn a player moves one of the three small caps of his color to any adjacent volcano that does not already have a cap, or to an adjacent empty space in the playing area. There will be as many as 6 possible moves for a given cap, as there can be up to six adjacent spaces for a given cap. Caps may not move outside of the playing area, may not land on top of any other cap, and may not land on a volcano which contains an opaque piece of the opposing color.

Moving a cap may cause the volcano beneath it to erupt (see below). If a move does not cause an eruption, the player may continue to move caps of his color until an eruption does occur.

When a cap is moved from a volcano to an adjacent volcano (or empty space), the volcano the cap was moved from erupts in the same direction as the cap was moved. The top piece of the newly uncovered volcano moves over the cap, and lands immediately on the other side of it. The next piece from the erupting volcano moves one space further than the last one. This continues until one of the following happens:

When the eruption is finished, any transparent piece which landed directly on top of another transparent piece of the same size is captured by the current player. Pieces landing directly on opaque pieces of your own color are not captured, however. Each player should keep captured pieces directly in front of them, in plain view, so the scores can be seen at all times during the game.

If a cap is moved from an empty space, this is also a non-eruption.

The game ends when one player captures at least one piece of each of the six non-clear transparent colors, including a solid-color tree of at least one color. At this time, the scores are tallied as described below, and the player with the highest score wins.

Though clear pyramids count as 'wild' when scoring as described below, they do not count as wild for fulfilling the requirement of a complete tree of a single color.

If a situation develops such that neither player can capture any more pieces (by mutual agreement), the game ends, and the player with the highest score wins.

Points are awarded primarily for trees. A piece can only be used in one tree for scoring, but players may use their pieces in the most advantageous fashion when calculating their score.

Clear pieces can be treated as though they are any other color. In this sense, they're wild, and can help greatly in creating single-color trees for scoring.