Hexano is a variant of Volcano played on a hexagonal board. Instead of playing for points, players are racing to be the first to capture one piece of each color and one complete single-color tree.

The game was designed in 2005 by Jeremiah Wittevrongel. He is a software developer and lives in Calgary, Canada. Hexano is still under development.

Note: These rules assume you know how to play Volcano. They probably won't make sense if you don't already understand the rules for the base game.

Hexano is a tactical battle between two players. Players take turns moving caps around a playing area filled with volcanoes. This triggers eruptions of colored streams of lava onto the playing field. The object of the game is to capture a collection of Icehouse pieces which includes one of every color, and one complete "tree" (a stack of a small piece on top of a medium piece on top of a large piece) of any single color. 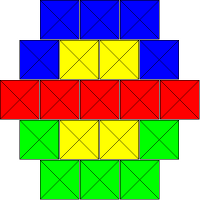 There will be five nests of each color, except for one color which will only have four nests. Place the five small black pieces on top of any five nests. Put aside the medium and large black pieces, as they will not be used.

The general mechanics of play are the same as those for Volcano. Please refer to those rules for guidance on how the caps move, how eruptions occur, and when eruptions stop. All of these rules are stay the same in Hexano.

The major difference between this game and Volcano in terms of mecahnics is the shape of the playing field, and the directions you may move the caps. Caps can be moved to any adjacent volcano or empty space. Given the hexagonal arrangement of the board, this means there are at most 6 possible moves for a given cap (as opposed to 8 in Volcano).

The first player to capture one piece of each of the four colors, including at least one full tree of any single color is the winner.

Unlike Volcano, there are no points in Hexano.