Cirk was created by the Dutch game inventor Corné van Moorsel in 1998. It was sold by HiKu-Spiele in Germany. Unlike most other mancala games, the counters are differentiated by color to indicate ownership. A minor variant of Cirk is Tornado.

The game is played on a circular board numbering seven holes at the periphery and another hole in the center with nine black and nine light-blue stones. 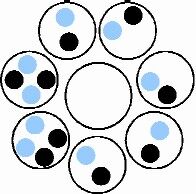 Each turn a player removes his own stones from a hole and sows them, one by one, in the following holes.

If the last stone falls into a hole which contains only enemy stones, these are captured and put in the central hole.

If the last stone is dropped into a hole which contains only friendly stones, these (including the one just put into the hole) are taken off the board. In the next turn of that player they are reintroduced into the game by distributing them into consecutive holes, one by one, in the player's direction starting in any hole of the periphery. This counts as a full move.

The first player who has no stones left (either in the playing holes or in hand) has lost the game. A draw is impossible.

If you want a more challenging game, put twice as many counters in each hole.