The first commercialized mancala variant in the USA was Chuba ("to extinguish", "to eat up") which was published by "Milton & Bradley" of Springfield, Massachusetts, in 1891. They described it as "an adaptation from a rude game of eastern Africa". Chuba was invented by Rev. Dr. Erwin H. Richards, a resident of Norwalk, Ohio, who filed a patent application on November 20, 1890. The patent number dated March 17, 1891, is 448,574. E. H. Richards was a Methodist missionary who founded in 1890 the United Methodist Mission at Chicuque, Mozambique, which today has become the Igreja Metodista Unida em Mozambique. 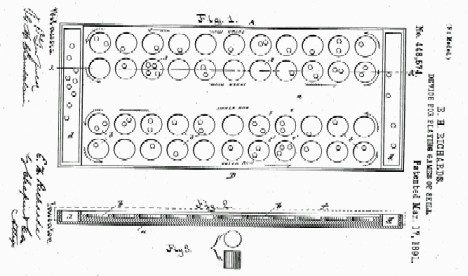 Without doubt the game is derived from Tschuba, a game played by the Thonga or Shangaans who live from St. Lucia Bay, South Africa, to the Sabie River in southern Mozambique. The rules are identical with those of a particular form of Tschuba described by Wagner in 1917, but its exact initial position seems to be unknown in Africa.

Chuba is played on a board of four parallel rows made of eleven holes called "pockets". Each player confines his playing to the two rows nearest to him. At each end the board is provided with a receptacle for containing the captured counters in the playing of the game. Initially there is one counter in each pocket of the outer rows, while there are two counters in the pockets of the inner rows except the pocket on the extreme left (as seen from the respective player) which is kept vacant.

Play is counter-clockwise around the two rows owned by the same player.

When all the counters of a player has become single, those remaining in his outer row which have not been played on are forfeited to the opponent.

The winner is the player who captures all his opponent's counters.

Retrieved from "https://mancala.fandom.com/wiki/Chuba?oldid=13833"
Community content is available under CC-BY-SA unless otherwise noted.