Calcala was designed by Lloyd Krassner, Palm Coast (Florida, USA), the owner of Warp Spawn Games, in 2006. It is a two-dimensional sowing game.

The game is played on a square board of 6x6 pits.

At the beginning, each pit contains 2 glass beads (standard game, but see variations below). 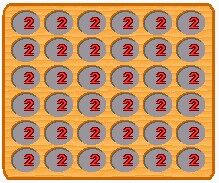 On his turn, a player takes the stones from any pit and sows them in any direction, either vertical, horizontal, or diagonal, one by one, starting in the next pit.

If the last stone falls in a non-empty pit, its contents are sown in another lap continuing in the same direction.

If a turn starts from a pit on the edge of the board or a corner, the player must sow the stones either along the edge or directed into the board. He may not immediately jump off the board and re-enter it from the other side.

The move ends when the last stone falls into an empty pit.

Afterwards the player captures all the stones in the next consecutive pit, if there are any.

The game ends when 6 or less counters remain on the board.

The player who captured most stones wins the game.