Calady was invented by Professor Alexander H. Slocum in 1998. He works for the MIT Department of Mechanical Engineering in Cambridge MA (USA). It is a multi-player mancala game especially designed for children. Calady is marketed in the USA by UDC Products. A related game is HyperCalady. It was invented by Joe Foley who also wrote MicroCalady a simple Java program for Calady.

Calady is played on a cross-shaped board of 20 pits. Each player owns one row of six pits. The four rows are overlapping each other in the center of the board. At the right end of each row is a store called "kalaha" (Note: the kalahas are missing in the original board despite being considered as existing).

Initially there are either 3, 4 or 5 seeds in each pit. 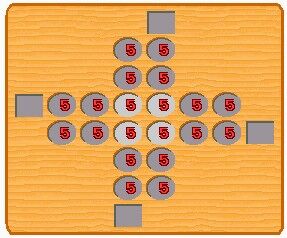 The youngest player begins. If two players are the same age, the player whose first name is closer to the beginning of the alphabet goes first.

The players sit at the end of each branch and "own" the holes of the closest horizontal row in front of them.

The game ends when one player has no seeds left on his side to play with. The remaining seeds are won by the opposite player.

The player who captured most seeds is the winner.

HyperCalady by Joe Foley is played as version 1 of 'normal' Calady, except that a capture is effected wherever the last stone is placed. Thus, seeds can be captured on either side of the board or even when the last seed falls into a non-empty pit. The game is much faster and the strategy very different.