View source
watch 01:54
Obi-Wan Finale - The Loop
Do you like this video?
Play Sound

A mancala board is used for playing mancala games. The oldest board was excavated in Abu Sha'ar, a late Roman legionary fortress on the Red Sea coast, Egypt, which is from the 4th century AD. A fragment of a pottery board in Aksumite Ethiopia in Matara (now in Eritrea) is dated by archaeologists as of between the 6th and 7th century AD. Often these artifacts are all what remains of a game after its rules have been forgotten, which is true not only for the early Ethiopian boards, but also for gameboards found in Andalusia and Germany (Castle Weikersheim).

Mancala boards are made of a wide range of materials such as wood, stone, clay, metal, ivory, palm ribs, plastic, cardboard, and even dried cowdung. According to the boardgame researcher de Voogt, the choice largely depends on cost, aesthetic considerations, ritual implications or practical issues such as portability and the material’s availability. In pastoral or nomadic societies, boards are often just dig into the earth. In Zambian villages, large boards are communally used in meeting houses. The more elaborate and colourful boards are prestige objects not only in indigenous societies, but also in the west, where they can be seen in ethnographic collections. The largest collection is in the British Museum (London), which has 119 boards. Other important collections are in the Musée du Quai Branly (Paris - over 40 boards) and in the American Museum of Natural History (New York - at least 25 boards).

A mancala board is composed of rows of holes and sometimes stores. Its simple design has led researchers to assume a much older age of the game than it could be proved by archaeological findings.

The aethetic qualities of mancala boards were discussed by Alexander Johan de Voogt and Roslyn A. Walker. In this context, de Voogt pointed to the life cycle of wooden boards, which change as they are smoothened by endless play, the holes widened, the surface scarred until they disintegrate.

Mancala board of Abd-al-Rahman's daughter, Andalusia

Mancala board of Arguni, New Guinea

Hoyito board dug into the earth, Dominican Republic

Hoyito board drawn on the ground, Dominican Republic 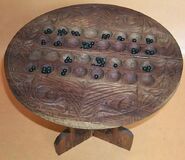 Adapted from the Wikinfo article, "Mancala board" http://www.wikinfo.org/index.php/Mancala_board, used under the GNU Free Documentation License.