View source
watch 01:36
We're Getting Mutants in the MCU - The Loop
Do you like this video?
Play Sound

Many traditional board games are played blind, e.g. Chess (called "Blind Chess"), Checkers ("Blind Checkers"), Nine Men's Morris and Go ("Blind Go"). Mancala games can also be played by the blind or, to make the challenge more difficult, by a blindfolded person. 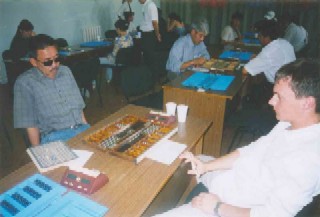 In Toguz Kumalak, a traditional Kazakh mancala game played all over Central Asia, there are regular championships for the blind and clubs where blind people daily practice this game. In tournaments they use special boards and notation sheets. The current Toguz Kumalak World Champion of the Blind is M. Kurmanbetov.

An Awele tournament for the visually impaired was organized by CRDP Nord in Lille, France, in March 2005.

Víktor Bautista i Roca, a European Oware player, reported in 2006 that he played Oware blindfolded together with a friend in a restaurant while half the restaurant were looking at them amazed. Both are not visually impaired. Víktor wrote:

"At the begining it was not easy, but after a few moves, we have really enjoyed the experience. We mostly counted by touch, but we were also just remembering everything."

He also recommended, at least when starting to play blindfolded, to have a referee at hand, who may assist when problems arise.

In 2004, Kalah was recommended as a teaching tool for blind children by the National Organization of Parents of Blind Children in the USA. In 2011, J. Nuno Silva, Carlota Dias and Pedro Palhares gave a talk during the second Recreational Mathematics Colloquium, which was held in Évora (Portugal), that suggested Slimetrail for visual impaired children.

Alexander Johan de Voogt, world-renowned mancala expert, wrote in his dissertation on the characterization of Bao mastership that in 1992 Blind Bao was unknown in Zanzibar or even in East Africa. He then designed a "blind play experiment" to research cognitive abilities of Bao masters which was conducted from 1992-1994. His informant, the master Abdulrahim Muhiddin Foum (known as Abdu), could at this time not calculate more than five rounds. De Voogt concluded in 1995 that " if very long takasa (i.e. non-capturing moves) take place in a game, it is possible to beat any master of Bao, when they play blind." Later, however, Rob Nierse, another Dutch mancala expert, reported that he wasn't able to win a single game against Abdu, although Rob could see the board and Abdu had his back turned against it, so not even being able to count the seeds by touch. In January of 2013, Misheck Lobole was the only visually impaired player during the Macheza Bawo Tournament in Malawi. Out of four games, Lobole won two in the qualifying stage. He learnt the game, which is a close variant of Bao, in 1998. He stated in an interview given to the newspaper "Malawi Nation: "Bawo is a mind game. You need to calculate your opponent’s moves, so being blind, you touch his piece. Some opponents do not take it kindly, especially when they are under siege. The other thing is that some people see it as imaginable to lose to a blind person."

The ethnomusicologist Alan Pankhurst Merriam wrote in 1953 that Igisoro (also known as Kubuguza), another mancala game with four rows, is sometimes played blindfolded:

"It is reported by informants that experts at kubuguza play blindfolded (...)."

Latho is an Ethiopian game of memory played blindfolded on a mancala board.