Basic Crossroads was invented by Sue and Joe Hanson in the early 2000s. They live in Mahomet, Illinois (USA). This mancala game was especially designed for four players. It uses a unique cross-shaped board, hence its name. The game is produced by Happy Viking Crafts, a business owned by the Hansons. A related variant is Nasty Crossroads.

The game is played on a cross-shaped board which consists of twenty pits (arranged in four rows intersecting each other in the center) and four stores, one at the end of each branch.

Initially there are four stones in each pit.

The players sit between two branches of the "X". Each player owns the edge pits of two branches on his side of the board and the "reservoir" (store) on his right. 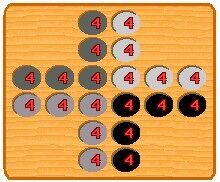 Initial Position - Each Player's Area Marked by a Different Color.

Play is counterclockwise around the outer edges.

On his turn a player sows the contents of one of his pits, one by one, into the following pits along the edges. Stones are sown into the player's own reservoir, but not in those of his opponent's.

If the last stone falls into an occupied pit, its contents are distributed in another lap (called "continued play" by the Hansons).

If the last stone is placed into the player's own reservoir, he gets a bonus move.

If the empty pit the last stone lands is the player's central hole, he captures any stones held in the central pits of the players next to him, but not the opposite player.

The turn ends when the last stone falls into an empty pit (either with capturing or not).

When a player's section is empty, he is out of the game. The other players are continuing the game, bypassing his pits and reservoir.

The game ends when only one player remains. That player puts any stones remaining on the board in his reservoir.

The player with the most stones wins and the other players are ranked according to the number of stones they have captured.

For a faster game players can start with just three stones in each pit.