55Stones was invented in the Halloween night 2002 by Ralf Gering in Kusterdingen, Germany. The game was originally meant to be a candidate of the Simultaneous Game Design Competition sponsored by About Board Games and Abstract Games magazine in 2002/2003, but when the inventor became a member of the jury, he withheld the game. 55Stones (originally spelled 55 Stones) was first published in the Yahoo! forum mancala games on February 7, 2004. The game is also described in a Catalonian Wiki on mancala games and at BoardGameGeek. It was added to Super Duper Games, a Canadian hobby site for playing various freely available games over the web, on October 21, 2006. The implementation, however, is flawed (as of January 10, 2012) . Today, 55Stones is one of the best-known non-commercial modern mancala games according to BoardGameGeek.

The game was described in the German and the English Wikipedia, but on both websites the articles were deleted early in 2006 after Tobias Schmidbauer, a 19-year old college student, claimed that the game has no encyclopedic relevance. In the German discussion, however, he admitted that his request for deletion was an act of revenge because the author of the 55Stones article critisized him for some reverts. The vast majority in the German discussion wanted the article to be kept. Nevertheless, the administrator Uwe Gille, a veterinarian with no particular interest in games, eventually deleted it. In June 2007, an article on 55Stones was again added to the German Wikipedia because the game became much better known after its implementation on the web. The new article was deleted after just a few minutes by the admin GNU1742 without checking its notability or discussing the topic. Then the author was banned, before he could explain why he had written the article on the game. The next day, he gave a report on the discussion site of the general mancala article about what he perceived as power plays, but his statements were constantly reverted by two users. Eventually he was banned again, this time by the admin SINN. A number of German Wikipedians even started a smear campaign on Wikinfo and vandalized several of its pages. These events show the kind of manipulations, censorship, and abuse of administrative power typical for the German Wikipedia.

55Stones received five hate ratings on BoardGameGeek: the first one in 2008 by Chris Steere, after the game's author wrote a critical article about his father Mark who is well-known as a psychopath all over the internet. A second hate rating came from "abstractfan", a fan of the Spanish game designer Néstor Romeral Andrés, after several of his games (e.g. Coffee, Domina 4, Omega, Taiji) were identified by Ralf Gering as rip-offs that are based on earlier games. After a thread was opened on BoardGameGeek on March 8, 2012 to discuss this issue, three more hate ratings were given by Sam Houston (March 8, 2012), Sam Houston, Jr. (March 9, 2012) and Sam Houston, Sr. (March 9, 2012). These were all sockpuppets of Mark Steere, which was acknowledged by him in a public chat at igGameCenter (screenshots were taken as a proof). Their hate ratings affected all five games on BoardGameGeek, which were created by Ralf Gering. BoardGameGeek surpressed any discussion about these hate ratings, closing or removing threads and suspending the games' author for a day for starting a discussion in the complaints department of BoardGameGeek. Eventually all hate ratings were removed by BoardGameGeek except the first one. However, Mark Steere created another sockpuppet account on March 14 named "Christine Steelrush", giving two hate ratings and then gloating about that in an e-mail to the game's author.

Unlike most modern mancala games, 55Stones is a multi-lap game and it has just a single type of pieces.

"A new type of multi-lap mancala game where the players select the pits from which they want to sow in a sente / gote order based upon who made the last capture. Then players then sow the seeds simultaneously in an away and back cycle, pausing to pick up seeds from pits as necessary to continue, until someone drops a seed into an empty pit, thus capturing whatever seeds remain in the other player's hand. Gote seems to have a slight advantage on any given round, but since the sowing can easily extend to a great many (perhaps more than 50) individual drops before an empty pit is reached, planning is very much a brain burner. Very innovative. "

"I find this game fascinating in the ways that it stretches many of the mancala concepts. Very interesting to play and also makes me wonder just what you can do with mancala. "

"It is fun and thought-provoking."

55Stones is played on a one-rank mancala board, which has 11 holes.

Also, each player has a cup which serves as a store for the stones he captures. The players called West (or Blue on Super Duper Games) and East (or Red) sit at the distant ends of the board and the cup is put on the right side, respectively. Each hole has initially 5 stones. Altogether, you need 55 stones to play the game.

You may only take the contents of a hole which at least contains two stones.

Then both players simultaneously distribute the contents of their chosen hole towards the opponent. The stones are distributed one by one. In each step one stone is dropped simultaneously while players count together and aloud "one, two, three, four, ..." for each step done in a move.

If the last stone is dropped in a non-empty hole, its contents are taken (including the stone you just dropped there) and simultaneously distributed together with your opponent in the following holes, if the opponent still has stones in his hand. A hole is also regarded as "non-empty" if the opponent has just dropped a stone into it.

Each step is defined by dropping exactly one stone. Lifting up stones from a hole is not considered a step.

If a stone is dropped into an end hole, the direction of distribution is changed 180 degrees, that is, you continue in the opposite direction.

If a player decides to take the contents of the most distant hole for playing his first lap, he must move towards himself.

If the last stone of both players is dropped into the same hole or in empty holes, the move is over and nothing is captured.

If the last stone is dropped into an empty hole, the player says: "Stop!" He then wins all stones which his opponent still has in hand after he completed this step.

After the first stones have been captured by reaching an empty hole first, the player who had sente decides if the board is turned 180 degrees ("pie rule"). This action changes the player's color, Sente/Gote and the ownership of captured stones.

This new pie rule was suggested by Clark D. Rodeffer and officially replaced the old pie rule on May 11, 2007. The old rule stated that the game can only be swapped after the first pair of simultaneous moves whether stones were captured or not. However, an extensive analysis of all 110 openings showed that this was unfair to the second player.

The game ends when simultaneous play is no longer possible.

If no player could have moved anymore, the stones which remain on the board are captured by the player who had Gote in the last move of the game. If there is still one hole on the board which could be emptied (i.e. contains at least two stones), the remaining stones belong to the player who would now have Sente.

The player who captured more stones has won the game. Draws are not possible, because the sum of all stones is odd. However, it is not known if never-ending moves exist or the board position could repeat indefinitely.

If you play the game for the first time, you can put just three stones in each hole.

The rules for captures are reversed. The player who has still stones in his hand when his opponent reaches an empty hole captures these stones. The player who has emptied the last pit at the end of the game, loses all stones that cannot be played. The "old" pie rule is used, i.e. after the first pair of simultaneous moves the first player decides whether he wants to swap or not. This game was invented on November 7, 2006.

The simultaneous play causes many unusual techniques. An empty hole can be protected by reaching it first.

At the beginning it is a disadvantage to have sente, but lateron it often becomes an advantage to be the first one to choose the move.

The endgame is decisive when the game is played by experienced players so that a good knowledge of sente and gote is important.

The values of all 110 opening moves have been calculated: 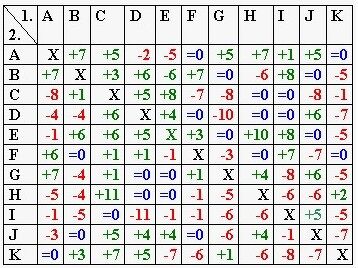 "Masters don't play moves if they don't know where they end." (Borrowed from Bao)

"A palace is a burden!" (Palace = A cup with many stones)

"A palace will decide the game."

"Many a little will make a mickle."

"Give your opponent what he wants!"

"Distant water won't help to put out a fire close at hand!" (Borrowed from Go)

"Proverbs only apply to weak players! (Borrowed from Go)

A game of 55Stones takes on the average 19 decision turns, when it is played to its very end (range 10-31). The moves before and after a capture can be considered double-moves as they are decided by the same player. The first player wins about 58% of all the games despite the pie rule.

East has Sente and plays B (marked light grey). How can West win the game?
Note: The cups are called A to K from left to right in the diagrams.

Solution to the 55Stones Problem

g! - West sacrifices three stones and gets Sente. As only one cup can be played, he wins the remaining eight stones and thus the game with 27 : 28 points.