4-Player Mancala is a Kalah variant which can be played by 2-4 people. It was developped by the American Gary MacLeod in the early 2000s. He lives in Mountain View, California. His game is sold by Square Root Games, Inc. on Amazon since 2001.

A similar game called Dankala with a slightly different design has been copyrighted by Daniel K. Miller, USA, in 2004. It is marketed by Thermal Formed Plastic.

The game is played on a board which has one row of six pits for each player. In addition, every player has a store to his right.

If less than four players participate, their pits and stores are omitted.

Initially there are four stones in each pit. 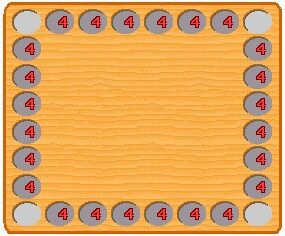 The right to start the game is determined by rolling a die. Highest roll goes first, then counterclockwise from there.

Moving and capturing is exactly the same as in standard Kalah.

If a player does not have any stones left in their pits, their turn is skipped until they have pieces to move.

The game is over when all of the stones have been captured in the stores.

The player with the most stones in their store is the winner.

A variant has been proposed by Ralf Gering in 2006. In the two-person game players control the two rows opposite each other. This leads to new tactics as players can now capture by opposition from their own holes. He also suggested to start with more stones per hole, five or six.